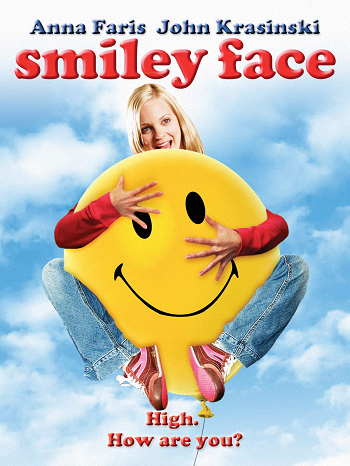 Smiley Face, a 2007 Stoner Flick, follows Jane (Anna Faris), a regular pothead and aspiring actress. Her normal day consists of 'waking and baking', eating chips and sleeping on her wonderful bed. The movie starts off with her talking to herself on the top of a still Ferris wheel. Then it goes back to 9 a.m. that same day, when Jane is smoking weed and playing on the computer. She goes to the fridge to get something to eat and finds her male roommate's batch of delicious cupcakes that he's saving for this Sci-Fi Party later. Of course, she eats all of them, but realizes they were also baked with pot.
Advertisement:

So, incredibly high Jane makes a list of things to do, including buy more pot to make her roommate more cupcakes, go to her acting audition, and pay the power bill in person before the company cuts off their electricity. That is how Jane's day begins... but it goes on well into sunset, where you will find Jane back on the Ferris wheel, with the original Communist Manifesto by Karl Marx in her arms and several angry people below her, ready to send her to prison.