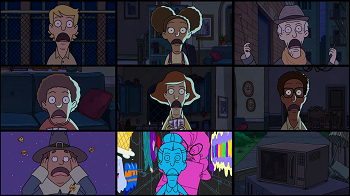 Original release date: June 25, 2021
Written by: Dan Hernandez & Benji Samit
Directed by: Mario D'Anna
♫ Gimme, gimme, gimme reasons it's not you
Who among us went and chose the witch way?
Tell me, tell me, tell me what you say is true
We gotta point the finger soon, but which way? ♫
—"W(h)itch Way"
Advertisement:

During a tristate blackout, Bitsy and Helen are trapped in New Jersey where Bitsy' hotel rivals are trying to steal her infrastructure plans. Meanwhile, the Tillerman family try to pass the time by playing a board game based on the Salem Witch Trials and things get a little too serious.

When Bitsy starts badmouthing Weehawken, Helen starts singing "Weehawkin" about why it's so great to her.

When Bitsy starts badmouthing Weehawken, Helen starts singing "Weehawkin" about why it's so great to her.