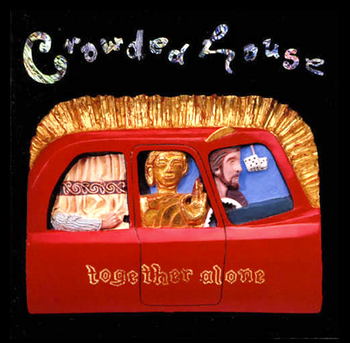 "Tell me all the things you would change / I don't pretend to know what you want"
Advertisement:

Together Alone is the fourth studio album by Crowded House, released in 1993. Riding off the success of their previous album Woodface, Crowded House, now minus Tim Finn and plus Mark Hart, regrouped in a house belonging to frontman Neil Finn's friends in the secluded town of Kare Kare, New Zealand, to record their forth album. The result was a highly atmospheric album, borrowing heavily from traditional Māori music and Post-Grunge, in addition to the band's Power Pop sensibilities.

While critics saw it as a fine album, albeit not as good as Woodface, the album remains a strong fan favourite out of the Crowded House discography.

Together Alone would also turn out to be the final full album with Paul Hester, who left the band during the tour supporting the album in 1994.