Literature / Return Of The Wolf Man 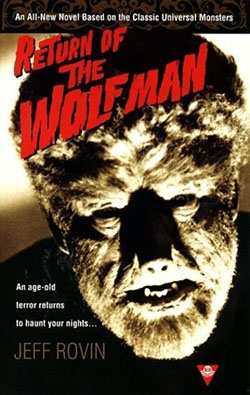 Guess who's back? Back again. Chaney's back. Tell a friend
Return of the Wolf Man is a 1998 novel by Jeff Rovin tying in with Universal Horror films. It revolves around Larry Talbot, the werewolf character who made his debut in The Wolf Man (1941) and was re-used in crossover films such as Frankenstein Meets the Wolf Man and Abbott and Costello Meet Frankenstein.
Advertisement:

The story begins with a recap of the ending of Abbot and Costello Meet Frankenstein, in which it is revealed that the Wolf Man survived his apparent death during his fight with Count Dracula. He meets the film's heroine, Joan Raymond, and after turning back into a human he convinces her to kill him and carry out a specific burial so that he will never be resurrected.

Fifty years later, in 1998, a group of people inadvertently revive the Wolf Man. Once he reverts to human form he is befriended by Caroline Cooke, Joan Raymond's niece. His initial concern is how to be killed once and for all, but his attentions are turned elsewhere when it transpires that Dracula and the Frankenstein Monster are back on the scene.

It was followed by two sequels, The Devil's Brood and The Devil's Night, by David Jacobs.