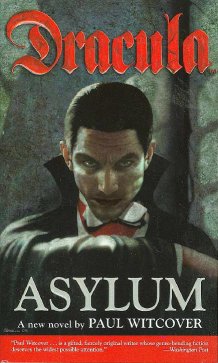 Bela Lugosi's alive.
Dracula: Asylum is a 2006 novel by Paul Witcover. Part of a series of novels from DH Press tying in with classic Universal Horror films (the others include Frankenstein: The Shadow of Frankenstein), this book is a sequel to Universal's Dracula (1931).
Advertisement:

Over twenty years have passed since Van Helsing drove a stake into Dacula's heart and left his body deep in Carfax Abbey. Now, during World War I, a bombing raid leads to the Count's resurrection by dislodging the stake. Meanwhile Lisa Watson, an American psychiatrist, is starting work at the nearby Carfax War Hospital in the hopes of treating her amnesiac fiance Denis Faulks.

Mysterious events begin happening around the hospital, and both Watson and Faulks eventually stumble upon the extent of Dracula's malignant influence. But the Count's darkest secret is found in papers left by Van Helsing: the vampire hunter deliberately avoided destroying Dracula once and for all, and for good reason...