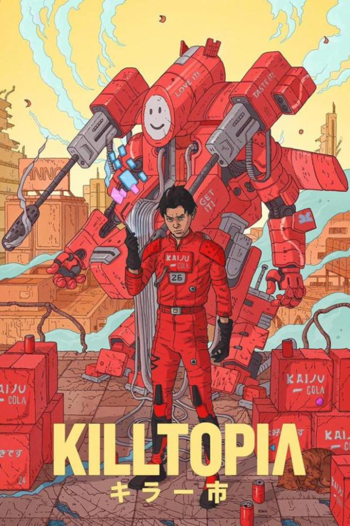 Killtopia is a Cyberpunk Comic Book by Dave Cook.

In the future, a MegaCity in Japan is rocked by a cataclysm in the Sector K district, and now it's infested with mechs. Ten years down the line, the Sector K district has become known as "Killtopia", and the center of the newest bloodsport. Soldiers of fortune called Wreckers go into Killtopia to hunt down and take out mechs for the entertainment of the masses.

Shinji is a rookie Wrecker who hunts mechs illegally (he lacks a permit) in the hopes of saving up to cure his sister's illness. One day, while out on a hunt, Shinji comes across a surprising discovery. It's a mech, but the mech is sentient, and has named itself Crash. What's more, Crash's code seems to be the things to cure a nano-plague that's killing humans around the world.

Once word of Crash's code gets out, the two soon find themselves on the run from Wreckers, android killers, and the Yakuza in a battle royale to end all battle royales.