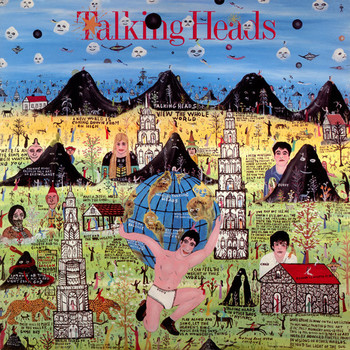 "We're on a road to nowhere, come on inside..."
Advertisement:

Little Creatures, released in 1985, is the sixth album by Talking Heads. Their first album after the massively acclaimed Speaking in Tongues tour and associated concert film, this one eschews the blend of Post-Punk and afrobeat that Remain in Light and Speaking in Tongues previously established in favor of a more stripped-back blend of Alternative Rock and Country Music. Consequently, there were fewer guest musicians compared to the band's previous two albums, with most of the songs played by the core group, though percussionist Steve Scales (who played on Speaking in Tongues) returned for this album. Saturday Night Live saxophonist Lenny Pickett also appeared here.

The resulting album was the band's biggest-selling: while it charted considerably lower than previous releases, peaking at just No. 20 on the Billboard 200, the album pushed over two million copies in the United States alone (allowing it to be certified double-platinum by the RIAA in 1994) and topped the New Zealand Albums chart. The album would also be certified platinum in New Zealand and gold in the United Kingdom and Germany.

True to David Byrne's intention only to play live when he felt he had something new to say rather than just promoting a new album as explained on the "self-interview" promoting Stop Making Sense, this was the first Talking Heads album not to have a supporting tour, and there would be none for the remainder of their career. Barring the occasional live performance, Byrne would not hold another major concert tour until the tour to promote Uh-Oh, his first solo album issued after Talking Heads' official breakup, in 1992.

As Remain in Light heralded the arrival of World Music influences in popular music in the '80s, this album, with its folk, country and Americana influences would signal a turn toward more "organic," "rootsy" textures in popular music in the second half of the decade alongside Dire Straits' Brothers in Arms the same year. This change in public preference would ultimately serve as a contributing factor to the mainstream emergence of Alternative Rock at the end of the decade and the start of the next.

Little Creatures was also the first regular studio album released under the band's deal with EMI outside of North America (though not the first release of any kind with that distinction; the first EMI-released Talking Heads product was the Stop Making Sense live album in 1984). EMI would continue to be the band's main international distributor all the way until the label's dissolution in 2012, after which the rights would move to Parlophone Records, EMI's European successor.

The album produced three singles: "The Lady Don't Mind", "Road to Nowhere", and "And She Was".

Bonus track on the original international CD and cassette releases:

From the sleep of reason, a trope is born: