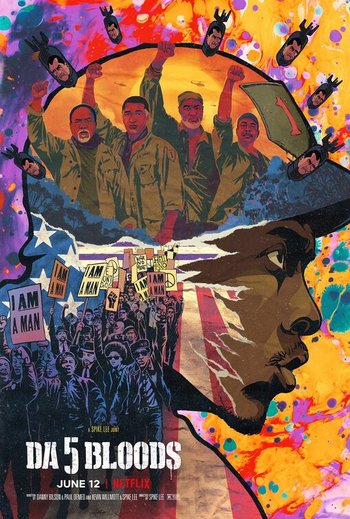 "We repossess this gold for every single black boot that never made it home. Every brother and sister stolen from Mother Africa to Jamestown, Virginia way back in 1619. We give this gold to our people."
— Norman
Advertisement:

Da 5 Bloods is a 2020 war / adventure joint by Spike Lee, with a screenplay by Lee and Kevin Willmott (Blackkklansman), from an original screenplay by Danny Bilson and Paul DeMeo (The Rocketeer).

The movie tells the story of “the Bloods”, comprising of Paul, Otis, Melvin, and Eddie, four veterans of The Vietnam War who return to the country decades later to retrieve the remains of their beloved squad leader, Stormin' Norman. The journey for Norman's remains is only part of it, however, as the Bloods also seek to discover a stockpile of gold bars that had been buried alongside him. They are soon joined by Paul's son David, who worries for his father's well-being as the group encounters activists, shady businessmen, mercenaries, and their own secrets on their quest for treasure.

Tropes Associated With Da 5 Bloods include: