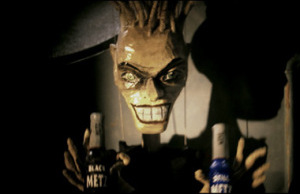 "Beware the Judderman my dear, when the moon is fat ..."
"This is like if you took every psychopathic thought anyone's ever had and put them all together to make an advert."
— easportsbig899, on TNT's "Walking the Bird" promo.
Advertisement:

Isn't it surprising the lengths some advertisers will go to make you buy things?

Particularly scary commercials can become a Memetic Mutation, and in decades' time fall into Pop-Cultural Osmosis. Unfortunately, the side effect is that nobody can remember, "What Were They Selling Again?"

Due to the sheer amount of nightmare fuel they always give off, PSAs and PIFs not only have a subpage, they have subpages of that subpage.