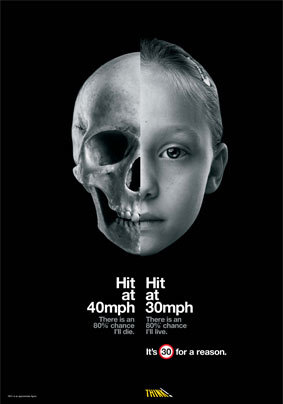 Particularly notable campaigns and organizations have their own folders.

Just because we've made it past abusers and drugs doesn't mean the wee ones are safe. Children are naive, curious, and fragile, so these ads make sure to pile on the horror by showing just what will happen if we don't keep them from getting into dangerous things.
Child Safety
Advertisement:

Once you have seen these, you'll definitely remember to take every precaution to prevent a fire from breaking out, and make sure that everyone's prepared in case one does, lest everything you hold dear goes up in smoke.
Fire Kills
What the US Partnership To End Addiction is to drugs, UK Fire Kills is to fire safety.
Miscellaneous
Advertisement:

As fun to watch as fireworks are, keep in mind they're essentially colored explosions. Things are fine when they're set off high in the sky away from people, so let's make sure to follow proper guidelines to keep it that way. If not... well, you won't have to imagine what could happen. Even now, centuries after fireworks were first made popular, some people still don’t get the memo that you shouldn’t be stupid when it comes to things that can explode, hence why there’s quite an abundance of PSAs on this subject.
Firework Safety

It goes without saying that guns can easily kill, hence why there's a protocol for Gun Safety. If one is not kept in responsible hands, they could very well end up killing the wrong person.
Gun Safety

It really is no wonder why this is the largest section on this page. Vehicles, be they cars, buses, or trains, are many times faster than the average human being, and several times more massive, so it stands to reason that there are a lot of ways people could get maimed, killed, or worse should they misuse these things. These ads have been made to urge people to take great care whether you're the driver, a passenger, or a pedestrian. As you'll find out, the rules of the road are in place for a good reason.
Drinking and Driving Wrecks Lives
Safety on the Move's Drinking and Driving Wrecks Lives campaign has brought us several spectacularly depressing and nightmarish PIFs, which can be seen in a collection here

, if you desire. Some of their scarier efforts among the series include:
THINK!
The UK advertising campaign 'THINK!', which deals with road safety, has always had a few Scare 'Em Straight moments:
Transport for London (TfL)
With London being as large a city as it is, with an equally large transport system, Transport for London has made its fair share of safety campains through the years; its ads have strayed into Nightmare Fuel territory on several occasions.
TAC Victoria
The Transport Accident Commission Victoria tackles all sorts of driving PSA mentioned at the beginning of the section and all of them combine it with Tear Jerker, but the most notable ones are on Drunk Driving. In fact, they are the first notable ones that coined up "If you drink, then drive, you're a bloody idiot." This video

shows the majority of their PSAs and all of their ads can be summarized as, "Never drive drunk (you bloody idiot), never drive under the influence of drugs (you're out of your mind), never speed (don't fool yourself, speed kills and wipe 5-10 km off), never drive tired (take a break, fatigue kills), never drive distracted (distractions leads to disaster), drive more cautiously on country roads, be mindful of motorcyclists, and always wear seat belts (belt up or suffer the pain)."
Queensland Transport
Queensland Transport has made many horrifying commercials, including Pram, Negatives, Catherine, and more. They tackle speeding, drink driving, and seatbelts, and miscellaneous topics (looking out for children), mostly speeding. Most of their ads can be found here

.
Société de l'assurance automobile du Québec
What THINK! is to the British and the TAC is to Australians, the Société de l'assurance automobile du Québecnote Quebec Automobile Insurance Corporation, or SAAQ, is to Canadians.
Luchemos por la Vida
Luchemos por la Vida ("Let's Fight For Life") from Argentina have also treated us with some nightmarish commercials:
Miscellaneous

There are a lot of dangerous jobs out there, but someone's gotta do them. Better make sure that someone knows how to stay safe...
Workplace Safety

Sometimes people need to be reminded that they too can play a part in stopping crime... and that the unthinkable may happen if they don't.
Crime Prevention