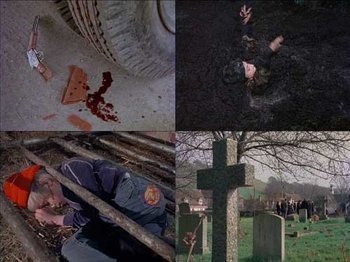 Apaches is a 1977 public information film from the United Kingdom. Intended to remind children of the dangers of playing around with farm equipment, this 26-minute-long film was distributed to and screened at schools all over Britain. The film was directed by John Mackenzie, written by Neville Smith, and produced by John Arnold and Leon Clore.

It was shot on a farm in the Home Counties in February 1977, with the child cast recruited from a junior school in Maidenhead, Berkshire, and was produced by Graphic Films for the Central Office of Information for the Health and Safety Executive. It was not only shown in schools, but it was also broadcast on television by ITV companies, particularly Southern, Westward, Anglia and ATV, whose regions covered large agricultural areas. It was also shown in schools in rural areas in other countries of the Anglosphere, including Australia, Canada and the United States.

It focuses on six children who pretend to be Apaches (the American Indian tribe) in their make-believe. They play their games on a farm where, one by one, they fall victim to fatal accidents. After that, they continue as if nothing happened, until only one is left.

Oddly, while most of the crew receive credits, none of the children who starred in the film were credited.

. Or if you prefer, you can watch the entire film here