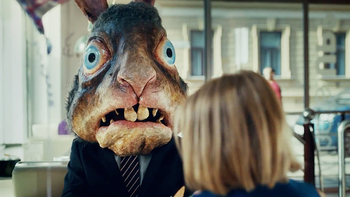 "How do our kids see us when we've been drinking?"
Advertisement:

Particularly notable campaigns and organisations have their own folders.

Considering that it's of the most widely-used recreational drugs in the world, contains a large amount of the drug ethanol, and offers numerous health risks (such as heart disease, stroke and early death), it's no surprise that alcohol has been the subject of several PSAs.
Alcohol
Advertisement:

This drug gets its own section for a reason. Nicotine is one of the most addictive and physically destructive drugs out there, and the most readily available, since one pack of cigarettes is cheaper than the average wine bottle. Ad campaigns need very little exaggeration to make it clear just what kind of toxins smokers invite in themselves and how they ravage the human body.
truth
The Truth organization is famous for its anti-smoking ads, and a good chunk of them are horrifying.
The Real Cost
The FDA is launching its first nightmare-tastic national public education campaign, called "The Real Cost", designed to prevent young people from using tobacco and to reduce the number of kids ages 12 to 17 who become regular smokers.
Miscellaneous
Advertisement:

As the Baby Boomer generation came to a close and pop-culture bloomed in a big way, so did the need to warn our youth about the dangers of drugs. And by "warn", we mean "make it clear they were wrought by the hands of demons".
Partnership for a Drug-Free America
The "Partnership for a Drug-Free America", later known as "Partnership for Drug-Free Kids" and currently "Partnership To End Addiction", has proven itself time and time again to be a reliable manufacturer of bizarre and emotionally harrowing content with their PSAs. But more than anything else, they know how to utilize the worst possible ways in which drugs can ruin one's life and give it to their audience straight... even if they'll be having trouble sleeping afterwards.
Meth Project
You thought the above-mentioned PSAs were scary? The Meth Project, launched in 2005, is just as bad, if not worse.
Miscellaneous

Just because we made it past drugs doesn't mean you're out of the woods yet.
Diseases and Illnesses

With all that, it sure is a good thing we have doctors and hospitals to keep us from dying, right? Well, that's as long as they have the necessary supplies...
Medical Awareness and Donations

You know how they always told you "Don't forget to brush" when you were small? All those reminders were for a very good reason.
Dental Care