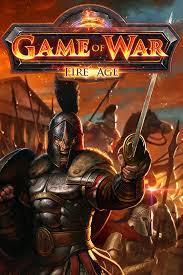 Game of War: Fire Age is a 2013 freemium mobile MMO strategy video game developed and published by Machine Zone, a privately held game company based in Palo Alto, California. The game has a high-profile advertising campaign and was one of the top-grossing apps in 2014.

The game consists of both city building through mechanics likened to Age of Empires and the earliest games from the Warcraft series. Gathering resources is required to create buildings, produce troops, and research advancements. Similar to other mobile games, much of the gameplay consists of selecting an action and then either waiting a preset amount of time for completion or expediting the task by making a payment. The title places an emphasis on players joining alliances. The game's chat system uses a Microsoft-based translator, as well as several others, including Google Translate. The translations allow players from all over the world to play together.

Game of War: Fire Age has sold well and was the third-grossing game app through Apple in 2014, and it was reported that Machine Zone projected $600 million in revenues that year. In March 2015, it was in the top 10 most downloaded free apps on both the iOS Appstore and Google Play. The game has been compared to Clash of Clans. While both games use microtransactions, Game of War: Fire Age was criticized for the user interface's aggressive style in seeking payments.