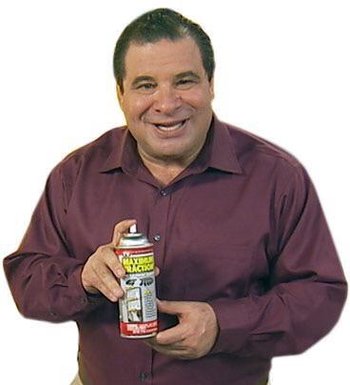 , featuring the company's co-owner Phil Swift enthusiastically showcasing various and increasingly elaborate uses of the products (ranging from stopping simple leaks, to stunts such as cutting a metal boat in half, taping it back together with Flex Tape, and going on the water with it).

Swift's bombastic style has been seen as similar to fellow memetic pitchman Billy Mays, and the ads have attracted the typical array of parodies via YouTube Poop and the like. However, it wasn't until JonTron did a video discussing the ads — highlighting the ridiculous nature of some of the demonstrations — that Phil Swift truly became a viral phenomenon.

The brand's YouTube channel and social media outlets have been self-aware in acknowledging its internet popularity, to the point that Phil Swift actually made an appearance in a sequel to the aforementioned JonTron video.

"To show you the power of Flex Tape, I sawed these tropes in half!"