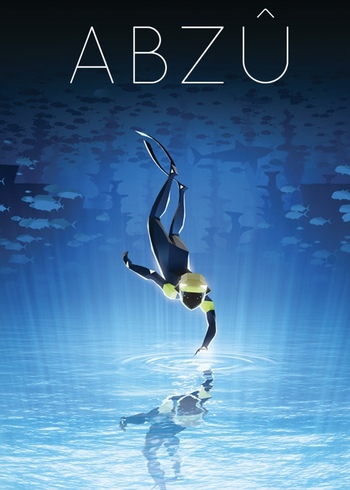 ABZÛ (coming from the cuneiform signs Ab, "ocean", and Zû, "to know", making the title roughly "Ocean of Wisdom") is an independent game from developer Giant Squid and published by 505 Games for the PC, PlayStation 4 and Nintendo Switch. It is styled like the works of thatgamecompany, which shouldn't surprise anyone, since the art director and composer of Journey (2012) teamed up on this game, too.

You play as a mysterious humanoid being venturing into beautifully rendered regions — in this case, the ocean — while pursuing a narrative which contains no narration and no dialogue, having to piece together the plot via the events and scenery around you.

Swimming around under the water, you occasionally find mysterious statues on which your character can perch to meditate, surveying the wildlife around her. You also occasionally find and activate small robots which follow you, using them to open passages through the coral which has grown over cavern entrances. Each chapter sees you exploring ancient, mosaic-laden ruins of a seemingly primitive, sea-oriented culture, then concludes by seeing you swim into a large, mechanical pyramid which seems to be powered by some advanced, alien technology, but you are left to discover how they relate to one another, assuming there is a relationship.