Third-party characters on the initial roster, characters who have been released as DLC or do not fit anywhere else.

Go here for the main article. 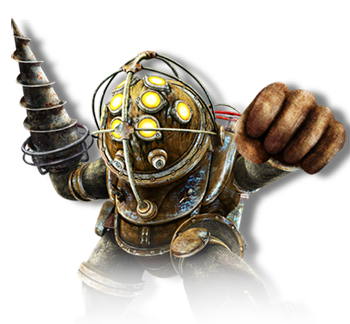 Genetically programmed to search for the ADAM essential to the social fabric of their undersea city, Little Sisters roam through the portals and tunnels of Rapture. Because the substance they extract from the recently fallen is so precious, the girls are accompanied at all times by their fearsome, diving suit-clad protectors, the Big Daddies. Armed with a deadly drill, possessing incredible strength, and capable of quick bursts of speed, the Big Daddies guard their charges jealously, making all who attempt to harm a Little Sister wish they hadn't. 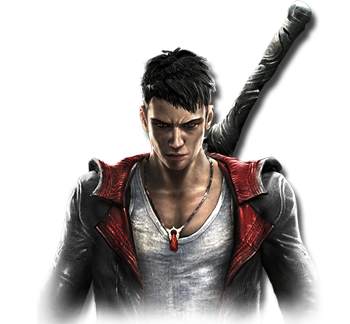 Inhabiting both the mortal and demon worlds, Dante harnesses super-human powers granted by his demonic heritage to battle supernatural forces which threaten mankind. As stylish as he is dangerous, Dante uses a plethora of weapons, including his twin handguns, "Ebony and Ivory," as well as his sword, "Rebellion," to dispatch his foes. 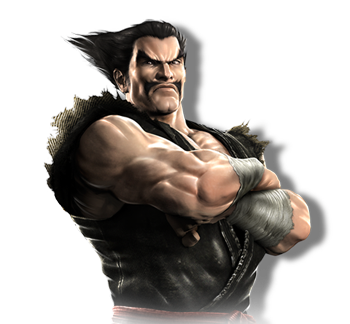 MISHIMA ZAIBATSU MASTERMIND
"まったくもって自分の力を試すことができそうもないな、話にならん." (Mattaku motte jibun no chikara wo tamesu koto ga dekisou mo nai na, hanashi ni naran.note Them having all of this power makes them not likely to try, quite the story.)
"Hmmp!"

Heihachi is the head of the Mishima Zaibatsu and responsible for the King of Iron Fist Tournament, attended only by the strongest fighters around the world. A master of Mishima Style Fighting Karate, Heihachi seems to be able to rejuvenate himself, displaying a remarkable agility and strength which defies his true age. His pet bear, Kuma, joins him in battle, adding to the already formidable challenge he presents opponents. 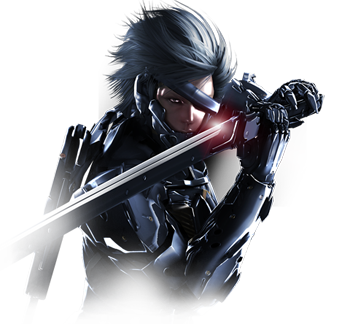 Trained for combat at an early age, Raiden is a former member of the FOXHOUND special forces. Equipped with a high frequency blade that can cut any massive enemy in one fell swoop, he has been outfitted with a cybernetic exoskeleton and prosthetic limbs to increase his prowess in battle. He used to be a child soldier and lost his family to the Liberian civil war. After going to America, he was turned into a cyborg by "The Patriots," an organization that secretly controls society, but then ended up killing them with "Snake," a man he worshiped. Afterwards, he began working as a bodyguard for a private military company. Though trained to be effective with all types of weaponry, Raiden is particularly adept at wielding swords. 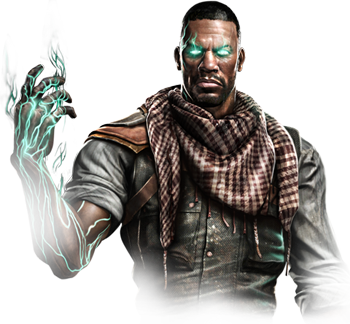 Exposed to the invaluable but dangerous Rift Energy during an attack by the Outcasts, Emmett protects mining operations from the same marauders, helping them meet their Rift quotas. Outfitted with a special regulator which keeps him from completing his transformation into an Outcast, he’s become a gun for hire, utilizing a variety of weaponry and support structures to out-maneuver and defeat his enemies. 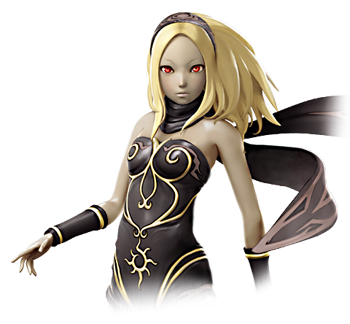 GRAVITY QUEEN
"Time to show 'em what we've got, Dusty!"

Unsure of where she comes from or how she got her fantastic ability to control gravity, Kat embarks on a quest to save the people of Hekseville from the invading Nevi. Accompanied by her feline companion, Dusty, she aids those in need while searching for answers to her mysterious origins, all the while gaining confidence in her powers. 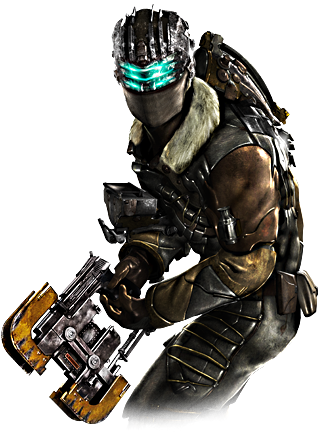 An ordinary engineer pulled into extraordinary circumstances, Isaac is the sole survivor of the USG Ishimura incident: a mining ship disaster in the far reaches of space that revealed the existence of a monstrous life-after-death infection known as Necromorphs. Isaac's ingenuity and cunning allow him to create improvised tools and weapons from the materials he finds, which may give him the edge he needs to survive in his quest to destroy the Necromorph scourge once and for all. 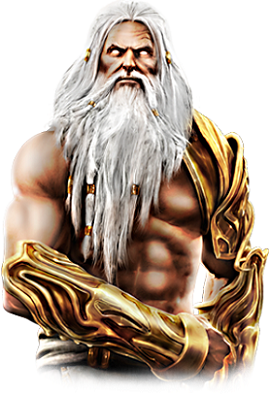 KING OF THE GODS
"Olympus shall never fall!"

From the marble halls high on Mount Olympus, Zeus rules over mortals and immortals alike as King of the Gods. Having claimed the throne by overthrowing his Titan father Cronos, Zeus keeps a careful watch on his own offspring. Even now Zeus' half mortal son, the Spartan Warrior Kratos, rises up to take revenge. As the most powerful of the Olympians, Zeus will defend his supremacy against any who oppose him. His justice is swift and delivered in devastating thunderbolts and lightning.

The Minions
Other Jobs
Minions are Fun Sized cheerleaders to the playable roster who show up in the Battle Intros, Victory Poses and whenever a player scores a double or triple kill. Despite their being supporting characters tied to a specific fighter, they can be customized to cheer for anyone.

Most of the Minions have other jobs in the game as well in which they appear normally sized, such as Sackbot's being a usable item, Dollface acting as a stage hazard in Columbia and many of them being playable in the form of an Assist Character or even a Super. The rest of the time they appear in the background of certain stages or in the arcade-mode cutscenes.

On January 29, 2013 it was leaked that several new minions would be arriving as DLC (arriving early in Asian markets) which included minions from franchises not currently represented by a fighter (i.e. Suzuki and Buzz). These were released in the west on February 12, the same day that Kat and Emmett arrived while a new set of 18 were added two weeks later. The full list can be seen here

Andrew Ryan and the Narrators
These disembodied voices serves mainly to speak for characters who don't often or can't speak for themselves. Aside from that, they're usually used to remind players of the narrative style of the character's original games, thus maintaining series flavor.
Final Boss 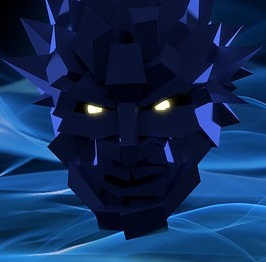 POLYGONAL MASTERMIND
"Power is an illusion. Absolute power is a seamless illusion."

Polygon Man was (Or at least, was meant to be) the mascot of Playstation, and is responsible for gathering together the various all-stars.