The good guys in the Ratchet & Clank series.

The Main Duo (and Qwark) 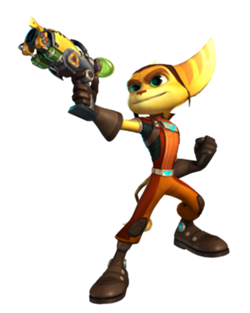 "Another day, another death course."
"Is it dangerous? ...Good."

The titular hero of the series, and a cat-like alien of the Lombax species.

Introduced as a lowly mechanic on the backwater planet Veldin in the Solana Galaxy, desiring adventure and a chance to explore the stars, Ratchet eventually crosses paths with a tiny robot on a mission to save said galaxy. The two team up due to their similar goals, and the robot (nicknamed "Clank" by the Lombax) promptly helps him with initially getting off Veldin. Over the course of their escapades, Ratchet and Clank's relationship slowly develops from a situational alliance to a powerful friendship, with Ratchet learning from said relationship altruism and other heroic virtues.

As eventually revealed in Tools of Destruction, Ratchet is one of the last known Lombaxes in the universe, having originally been born on the planet Fastoon in the Polaris Galaxy, but was sent to the Solana Galaxy's Veldin as an infant to protect him from Emperor Tachyon, the one responsible for their disappearance. Eventually, Ratchet defeats Tachyon and avenges his race, but the experiences he goes through during and after the journey to do so mellow out his impulsive traits even more, and this maturity further strengthens his connection to his friends, such as Clank and his new girlfriend Talwyn.

Agile, resourceful and always packing a huge arsenal, Ratchet is always a hero the universe can rely on— though Clank definitely deserves half the credit, too.

Tropes applying to him in both the original continuity and re-imagining:

Tropes specific to his re-imagining counterpart: 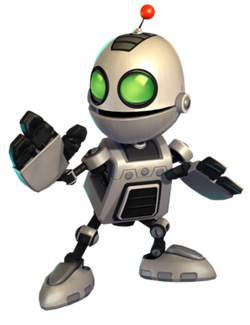 "Oh, dear. Why must we always choose between certain death and probable death?"
"Interesting. You are quite handy with your wrench."

The other titular hero of the series, and Ratchet's robotic companion.

Clank (though only having a serial number at the time) was originally created by a defecting computer in a factory on Quartu, a planet in the Solana Galaxy which the Blarg alien race used for weapon and war robot manufacturing. After learning of the Blarg's vile plans for the solar system, Clank escaped to warn galactic authorities, but ended up crashing on the planet Veldin. Finding and forming an alliance with local resident Ratchet (and getting his name in the process), the two set off on their adventure and foiled the Blarg leader's scheme, and became best friends ever since.

Over the course of Tools of Destruction and A Crack in Time, Clank eventually learns of his connection to the Zoni, energy beings with the power to travel through time and space. It is revealed that his own Zoni soul was created by Orvus, the Zoni leader and caretaker of the Great Clock, a giant structure used to maintain the universe on a temporal level. Even after learning more about his heritage and his potential role in succeeding Orvus, Clank realizes his friendship with Ratchet and aims to stay alongside the Lombax as long as he needs to.

Usually riding around on Ratchet's back but still contributing to their adventures in his own way, Clank is logical, polite and always desires to do the right thing, and makes sure that Ratchet (along with their assortment of other allies) stays on track. 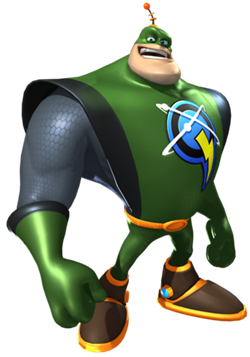 "Did someone say something about a savior?"
"To be a true hero of heroes, you need more than loads of charisma and a brilliant tactical mind! I couldn't have done it without… these massive guns!"

A famous superhero originating from the Solana Galaxy. Despite being treated as such and having genuine heroic moments at times, Qwark is in actuality a full-throttle coward with not much in the way of brain power who's mostly in it for the fame. Over the course of the series, he has had many encounters with Ratchet and Clank, as both an adversary and an ally, but thanks to his encounters with the two he's settled more on the latter side of things, and frequently helps them on their adventures. Or makes things worse, depending on circumstance.

A Lombax who aids Ratchet in the second game. 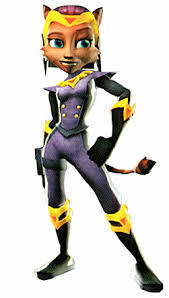 The former captain of the Starship Phoenix, now Mayor of Metropolis, and Ratchet's Temporary Love Interest for Up Your Arsenal. Later appeared in the comic book series. 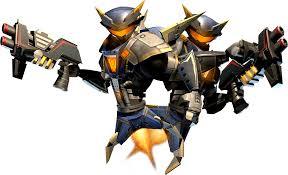 Don't bother trying to tell the difference between the two based on this picture.
Merc: Don't worry, boss. You won't end up like that last guy.
Green: I hope not, I still have nightmares about it.
Merc: Aww, suck it up, Green!

Merc and Green are the two robot sidekicks provided for Ratchet in Deadlocked. 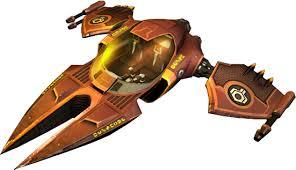 Aphelion in Tools of Destruction.
"Oh, a Lombax... I thought I'd never see one again! Thanks for repairing me."

A Spaceship Girl who was built by the Lombaxes, but left behind damaged on Fastoon during Tachyon's attack. She was later found and repaired by Ratchet, and has served as his ship since. 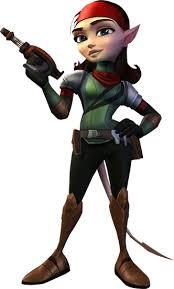 A young Markazian woman living on a space station in the Polaris galaxy, and daughter of the famous explorer Max Apogee. Helps Ratchet in Tools of Destruction and Quest for Booty, and later forms a relationship with him.

Talwyn's two robotic guardians, and veterans of the Great War in Polaris. 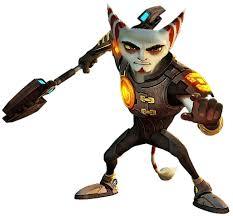 The only Lombax other than Ratchet remaining in the current universe. 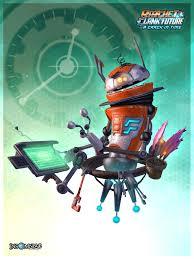 A former cleaner bot on Viceron, now the Junior Caretaker of the Great Clock, and Orvus' best friend. He served as Clank's only companion throughout the first half of A Crack in Time, until Clank's capture by Lawrence upon reaching the Orvus Chamber. By the end of the game, Sigmund is promoted to Senior Caretaker when Clank decided to return to Ratchet. 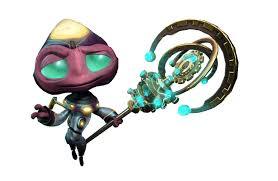 "Remember, the universe has a wonderful sense of humour. The trick is... learning how to take a joke. Heeheeheeheeheehee!"

Clank's father, the smartest of the Zoni and the creator of the Great Clock. 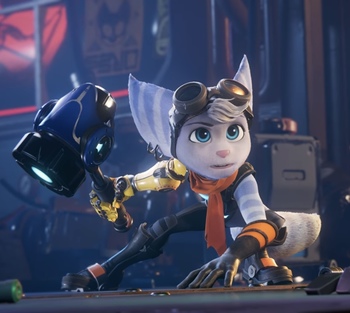 A mysterious female Lombax that Clank meets at the end of the initial trailer for Rift Apart, and an additional playable character.