Video Game / Macross 30: The Voice that Connects the Galaxy 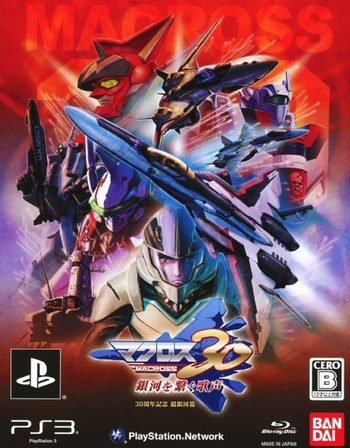 Macross 30: The Voice that Connects the Galaxy is a crossover game celebrating the 30th anniversary of the Macross series, taking characters from all over the timeline and putting them all in a single setting with a new, original story.
Advertisement:

The very nature of this game means you very well may be spoiled. If that is fine with you, by all means, continue reading.

The year is 2060, one year after the struggle between the Frontier Fleet and the Vajra. S.M.S. pilot Leon Sakaki is confronted by an unknown enemy, shot down from space.

After coming to, he is revealed to have been rescued by fellow S.M.S. pilot Aisha Blanchette, who is currently investigating the mysterious planet Ouroboros. The two soon come across a mysterious girl by the name of Mina Forte, who seems to have lost her memory. Meanwhile, a man named Ushio Todo, of the special N.U.N.S. team, "Havamal", has his own plans involving the planet.

All the while, various people across history are also being dragged across time to this location.

Released on the PS3 on Febuary 28, 2013, with fully-voiced cutscenes. Events and characters are included in Super Robot Wars BX.