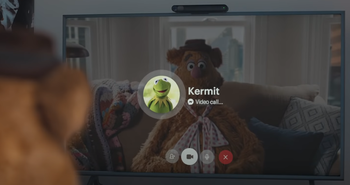 A series of commercials aired in November/December 2019, A Very Muppet Portal Campaign

advertises the Facebook Portal brand as a holiday gift with The Muppets, using the devices to keep communications with friends and family during the winter season despite distance between them. The ads run the gauntlet from side-splitting to heart-melting with all the Muppet flair you'd expect.

Statler: Kermit got everyone Portals, and Gonzo made him a sweater?
Waldorf: What a rip-off! Poor Gonzo did all that work!
Statler and Waldorf: Doh-ho-ho-ho-hoh!