As per Handling Spoilers, trope names will not be spoiler-marked. Read on at your own risk!

The three new main characters in Force: Thoma Avenir, Lily-Strosek and Isis Egret. Due to accident, the three of them meet in Ruwella, with Thoma saving Lily in a science facility and Isis meeting them in a town. The trio are refuging from the TSAB because Thoma and Lily are framed as criminals, but they are captured by the Hückebein family and eventually rescued by Special Duty Section 6. As a condition to be protected by this section, they have to join in.

Now being new recruits and being part of the Forwards, the three heroes train together with the five fellow Forwardsnote Ginga and Subaru Nakajima, Teana Lanster, Erio Mondial and Caro Ru Lushe under Captain Nanoha Takamachi and Vice-Captain Vita's supervision, and they assist their section to solve the Bible of the Silver Cross Incident.

The recruit trio includes members of different "races". Thoma is an Eclipse Driver, Lily is a Reactor Plug, and Isis is a human mage.

Voiced by: Asuka Tanii (Bible of the Silver Cross) (Gears of Destiny) 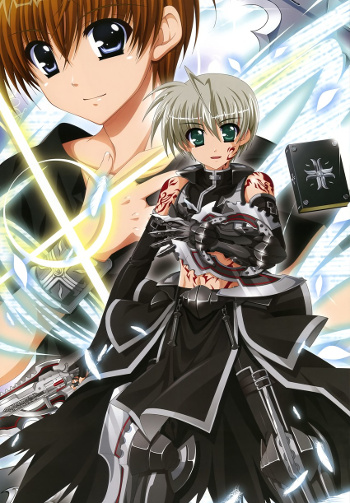 A boy who, while traveling in search of clues about the people who destroyed his home town, finds a girl named Lily in a research lab. He rescues her, gaining the powerful Divider-996 and becoming a fugitive from the TSAB in the process. Before these events, he is the Sole Survivor from the mysterious destruction of his entire town seven years ago. He later met Subaru Nakajima who helped him to find a new home, and he's nearly adopted by the Nakajima family, but he decided to travel around the world to find a hint to the destruction of his hometown, until the Bible of the Silver Cross Incident. Now being an Eclipse Driver, he is also the carrier of the Zero Gene and is now the target of the Hückebein family that tries to recruit him. Thoma joins together with Lily and Isis the Special Duty Section 6 of the TSAB that protects him from the criminals and trains him in combat.

Thoma is currently the only known character with two Reactors: the Bible of the Silver Cross and his Reactor Plug Lily-Strosek. 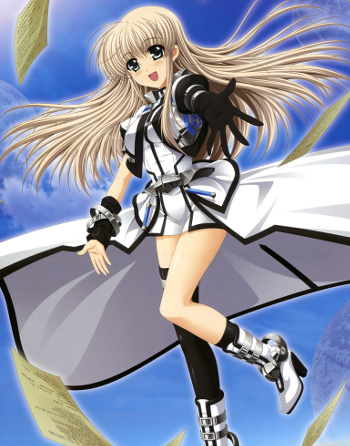 The fourth Reactor Plug of the Strosek series, who was the subject of an experiment related to the Bible of the Silver Cross. Thoma rescues her from a research lab. Later after the first big battle with the Hückebein family, she, Thoma and Isis join the TSAB to assist in the Bible of the Silver Cross Incident. She's Thoma's Reactor Plug, and her main role is to suppress the Eclipse Virus within him and to support him in combat. 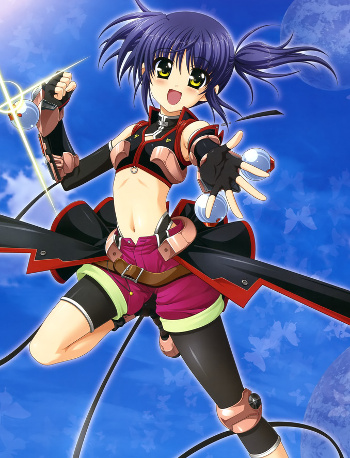 A girl who sells clothes to Thoma and Lily, later helping them escape from the police and joining to their journey. She actually is the only daughter and youngest child of the Egret family, managers of Egret Security Services, a company which guards important people; her birth place is Rigate, a place on Mid-Childa. After the first battle with the Hückebein, she, Thoma and Lily join the TSAB to assist them in the Bible of the Silver Cross Incident. Isis' main role is that of a bodyguard to Thoma and Lily. Her Device is called Perfume Glove, or "Perfy" for short. 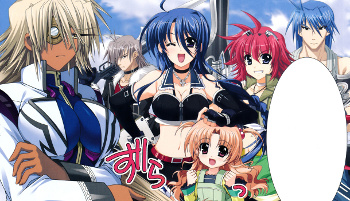 The antagonists of Force. A group of infamous killers that are known for slaughtering whole settlements, leaving no one alive. They are not actually related, but are all infected with the Eclipse virus. Widely believed to be invincible, they are now after Thoma in the hope that he will join their family. 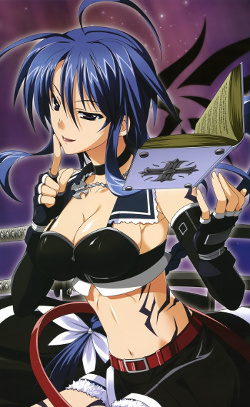 The leader and founder of the Hückebein family. She gathers several Eclipse infectees to her family and she wants to adopt Thoma, too. Curren is one of the first generation of the Eclipse infectees.

The first introduced antagonist, who was seeking Lily and Thoma's Divider. Veyron is the only member of the Hückebein without a personal Reactor. He's one of the first generation of Eclipse infectees. The Divider-928 is his favorite weapon. 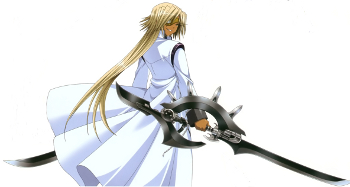 One of the main combatants of the Hückebein. She becomes Signum's rival since their first battle. She owns the Divider-944 and the Reactor König-09. 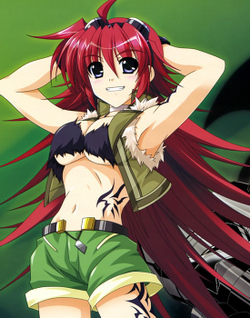 A cheerful young girl who is one of the youngest member among the Hückebein. She develops a rival relationship with Isis. She has the Divider-718.

A muscular and quiet man with teleportation abilities. He has the Divider-695 and is Reactor is Lange.

An effeminate looking young man, who usually stands in the background. 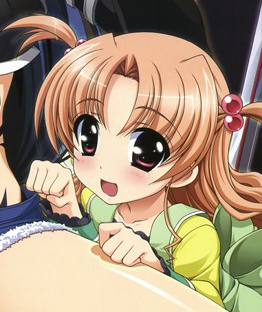 Stella is the youngest member of the Hückebein family and she's the pilot of the Esquad Hückebein.

The Hückebein "Fortune Teller" who meets up with Cypha in Chapter 25. She is their irreplacable informant and interrogator. 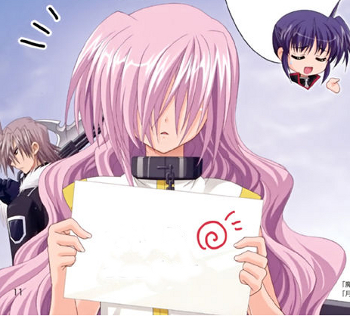 The former Reactor Plug of the infectee Diego until he's killed by Veyron. She's taken by Veyron and Arnage to the Hückebein family, and it seems she's about to become Veyron's Reactor. Rosalia is the 5th Strosek of the Strosek series.

He is the head of the Vandein corporation and is studying the Eclipse virus and the potential benefits. 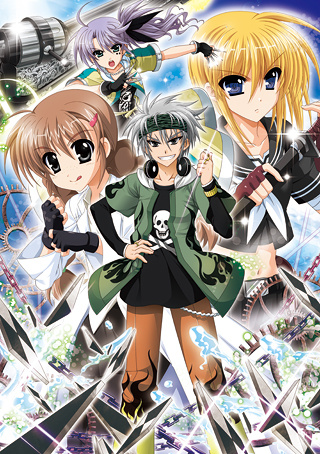 Another set of Eclipse infectees. They were hired by Hades Vandein to steal the Raptors from Special Duty Section 6, but they ended up arrested by them. The four members are Kurt Grendel, Mariya Ranevskaya, Quinn Garland and Lolo Endive.

The head and founder of the Grendel family. 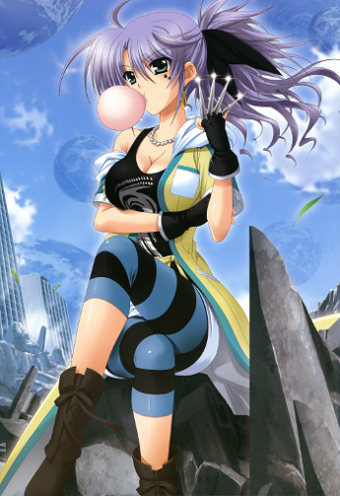 The sniper of the Grendel family and Kurt's right hand. 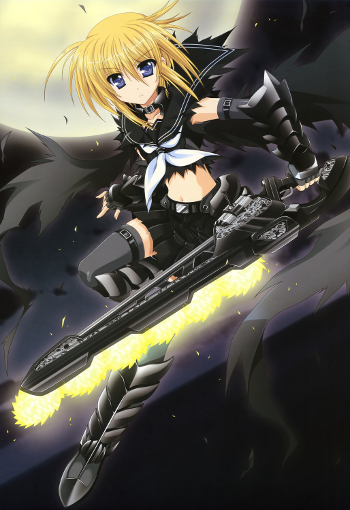 The special attacker of the Grendel family. She has the Divider-VG4 and the Reactor Gradion'. 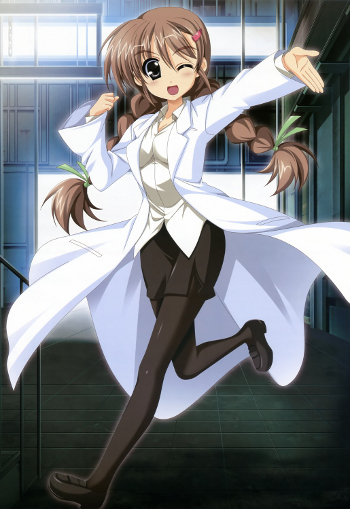 The courier of the Grendel family.