Literature / A Semester in the Life of a Garbage Bag 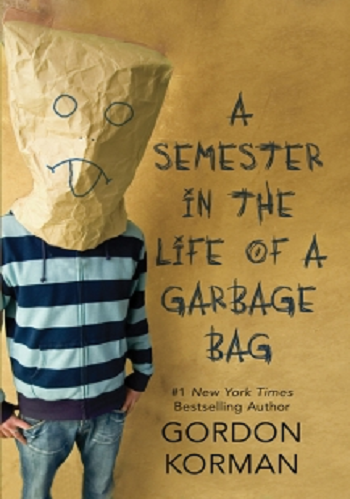 "On registration day at taxidermy school
I distinctly saw the eyes of the stuffed moose
Move."
Advertisement:

A 1988 YA comedy novel by Gordon Korman. Luckless, frustrated sixteen-year-old eccentric Raymond Jardine is determined to score a summer trip to Theamelpos, a Greek island legendary for bestowing good luck on visitors. He ropes Sean Delancey, his English partner, into various schemes to land them both on the island. Hilarity Ensues when they're partnered up with Ashley (a teen model they both fall for), wind up having to plan the Halloween event of the season and - most especially - when the deliberately obscure poet they've chosen for their English project turns out to have died after publishing only one poem. Meanwhile, their school has been chosen by the government as the test site for SACGEN, a revolutionary new clean energy device, but it doesn't work, leading to constant blackouts.