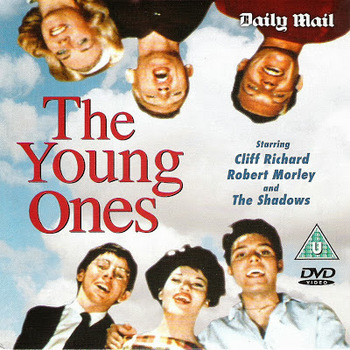 The Young Ones is a 1961 British musical film directed by Sidney J. Furie. It stars Cliff Richard and his band The Shadows, Robert Morely, and Carole Gray. The movie was one of the most popular movies of the year at the UK box office (second place; beaten by The Guns of Navarone) and, like Summer Holiday that came out later, spawned numerous hit songs and propelled Richard and The Shadows into stardom; many of the songs outliving the movie's success, such as the title song.

Scaffolding work threatens a nearby youth club and stolen blueprints reveal that it's the final ruling of property developer Hamilton Black (Morely), who wants to build more tower blocks. Unfortunately for him, his son Nicky (Richard) is a frequent performer at the youth club with his band (The Shadows) and is determined to keep the club open for all of his friends. With two weeks until the foreclosure, Nicky and Hamilton declare war with Nicky promising to raise enough money to stop production. He and his girlfriend Toni (Gray), with the help of some of their friends, decide to organise a play for their charity.