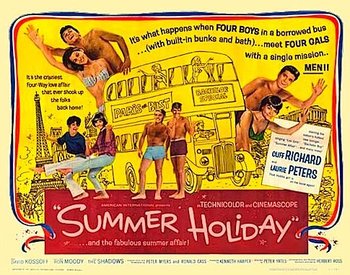 Summer Holiday is a 1963 British musical comedy starring Cliff Richard, fresh off his success in another popular 1960s' musical The Young Ones, and Lauri Peters. It was the directorial debut of Peter Yates and spawned many hit songs that have overshadowed the movie itself performed by Richard and 1960s' band The Shadows.

Cliff Richard stars as Don, who manages to hire a London bus for a trip to sunny Europe as the nearby beach is battered by heavy rainfall. He and his friends Cyril (Melvyn Hayes), Steve (Teddy Green), and Edwin (Jeremy Bulloch), with the help of other workers at the bus mechanic base, spend the week refurbishing the bus into a hotel, and the four friends drive off to France.

The boys start to pick up a variety of people on their trip, including three women who are touring singers, named Angie (Pamela Hart), Sandy (Una Stubbs), and Mimsie (Jacqueline Daryl), hoping to get to Greece, a singer named Barbara (Peters) dressed as a young man, as well as her talent agent Jerry (Lionel Murton) and her mother Stella (Madge Ryan), and the group have a wild time journeying through a variety of countries. And Ron Moody shows up too.