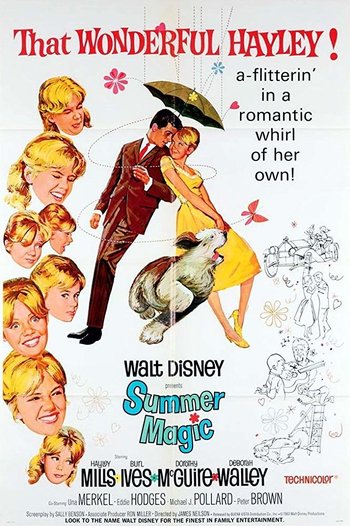 In ragtime-era Boston, widowed Margaret Carey (McGuire) and her three children Nancy (Mills), Gilly (Eddie Hodges), and Peter (Jimmy Mathers), are having financial problems. Nancy inquires about a yellow house in Beulah, Maine, and Osh Popham (Ives), the caretaker acting on behalf of a Mr. Hamilton, offers to rent it to them. When they move in, they find the house in a state of neglect, and with help from Mr. Popham, they begin to make repairs. As the Careys begin to adapt to their new town, they receive a letter asking for their orphaned Cousin Julia (Deborah Walley) to stay with them due to the financial failings of her adoptive parents, the Fergusons. The Careys agree, although Nancy and Gilly are not very glad to have their stuck-up, disagreeable cousin live with them.

The film was loosely based on the 1911 novel Mother Carey's Chickens by Kate Douglas Wiggin, who also wrote Rebecca of Sunnybrook Farm. The novel was previously adapted, under its original title, as a non-musical film in 1938.