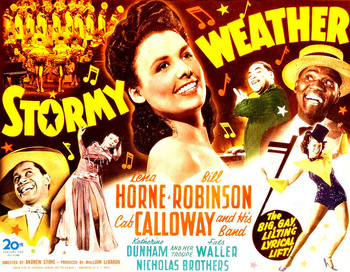 "Stormy Weather...since my man and I ain't together."
From The Golden Age of Hollywood, comes a 20th Century Fox film directed by Andrew Stone vaguely based on tap-dancing legend, Bill "Bojangles" Robinson.
Advertisement:

Stormy Weather (1943) follows the life and times of Bill Williamson (Bill Robinson), a dancer looking to make it big, and his relationship with beautiful singer, Selina Rogers (Lena Horne).

As of 2001, this film was put in the National Film Registry.

Don’t Know Why There’s No Tropes Up in the Sky: