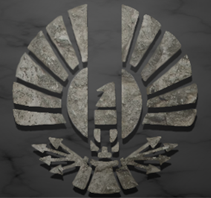 is a tournament set seventy five years before the beginning of The Hunger Games trilogy. It was completed on February 3rd, 2013.

As punishment for the attempt to overthrow their oppressive government, each of the 12 districts that comprise the nation of Panem are subjected to send one boy and one girl between the ages 12 and 18 to fight to the death in a staged arena. Only one may come out alive...

Your character happens to be one of the 24 unlucky tributes chosen for these gladiatorial games. Blood and tears will be spilled, alliances will be forged and broken, trickery and deceit will be used, but will your character go to such extremes in order to survive? Or will they seek to accomplish something more for their friends, family, or even their country?

A guide of the rounds can be found in the trivia page.

We now have a Character page!

Major spoilers ahead. Continue at your own risk!

Tropes pertaining to this OCT: