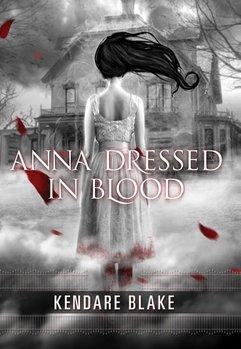 Cas Lowood is a ghost hunter, charged with dispatching harmful spirits. When one of his regular informants gives him a tip about a murderous ghost called Anna Dressed in Blood, Cas and his housewitch mother pack up and move to Thunder Bay in Ontario, Canada.
Advertisement:

Things get messy when Anna kills one of Cas's classmates but spares him, leading him to wonder why she did it. Now finding himself with an unwanted group of teenage ghost busters desperate to help him, Cas has to stop Anna before she kills anyone else. But things aren't always what they seem...

A sequel called Girl of Nightmares was released on August 2012, and the novel may be on its way to being made into a movie.