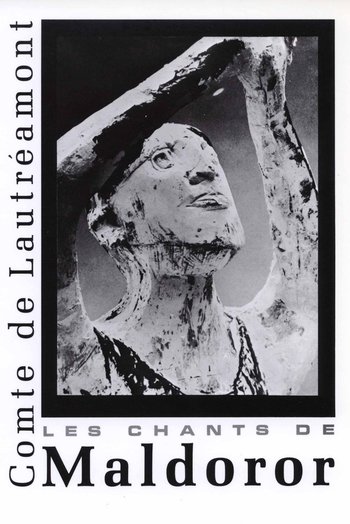 "May it please heaven that the reader, emboldened, and become momentarily as fierce as what he reads, find without loss of bearings a wild and abrupt way across the desolate swamps of these sombre, poison-filled pages. For unless he bring to his reading a rigorous logic and mental application at least as tough enough to balance his distrust, the deadly issues of this book will lap up his soul as water does sugar."
— Opening lines

Les Chants de Maldoror (The Songs of Maldoror), usually known as simply Maldoror, is an unclassifiable work of 19th century French literature by the Comte de Lautréamont, an otherwise unknown French nobleman, which tells the tale of the ultimate anti-hero. Maldoror is a cruel, callous, Byronic Magnificent Bastard who lives his entire life For the Evulz. Written in a wildly extravagant style, it’s a largely plot-free celebration of pure evil, and although it disappeared almost immediately on its first publication, it was rediscovered in the 20th century and had an enormous influence on the Surrealists.

More prosaically but more accurately, Les Chants de Maldoror is the main literary work of an obscure writer named Isidore Ducasse, who was born of French parents in Montevideo, Uruguay in 1847, was sent to school in France in 1859, was an undistinguished student, left school aged 19 in 1865, lived on money sent from his parents, published Maldoror pseudonymously in 1869 followed by a few other works, and died in Paris in 1870 from unknown causes which were probably related to the fact that the Siege of Paris was going on at the time.

Maldoror would likely have vanished without trace if the Surrealist movement hadn’t discovered it in the 1920s. It appealed to them on a lot of levels, the author’s bizarre sense of humour being one of them. Maldoror doesn’t just cross the line twice: it crosses it a third time, walks along the line with its eyes shut, urinates on the line, pretends the line isn’t there, and finally picks the line up, drapes it about itself and dances off singing into the gloomy twilight. This is all accomplished with huge amounts of Leaning on the Fourth Wall and Purple Prose.

Ducasse went on to write another work, Poésies ('Poems'), which aren't poems at all but a collection of maxims mostly taken from classic French literature, in which he appears to be attacking Maldoror's extravagance: an interesting early example of Author Tract combined with Creator Backlash and Heel Realization, except that scholars still can't decide whether Poésies is meant to be taken at face value any more than Maldoror is.

The French consider Maldoror to be a classic, and "Lautréamont" has been given the ultimate accolade of a French author: his complete works have been published in an edition of the Bibliothèque de la Pléiade

. the French equivalent of (and inspiration for) the Library of America

There have been various attempts to translate the work into English, most of them unsuccessful. The best as of 2016 is the version by Alexis Lykiard, who also translated the Poésies and Ducasse's few surviving letters.