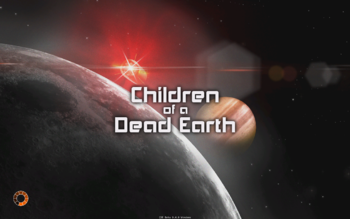 The most accurate space warfare simulator ever made.
Advertisement:

Children of a Dead Earth is the most realistic space warfare simulator you are likely to have ever laid eyes on.

The game's campaign features increasingly complex missions that allow you to come to grips with orbital mechanics, combat tactics and spacecraft engineering in an iterative process that allows you to experiment and innovate.

The story of the game is relatively straightforward: In the not so distant future, worldwide conflicts, weaponized climate change, and a total collapse of the planetary ecosystem has turned Earth into a Venus-like wasteland completely incapable of supporting life. As a result, the survivors leave the corpse of their planet and venture into space to rebuild, establishing colonies all across the solar system. However, not all is well as two factions rise to power: the Republic, and the United Sol Trade Alliance. Both vie for control of the Solar System, and as they expand, tensions begin to mount. Once again, the children of a dead earth prepare for war.

It can be bought on Steam here

. There is also an official blog with more info about the science behind the game can be found here

. The official forum is here