Video Game / Heroes of the Lance 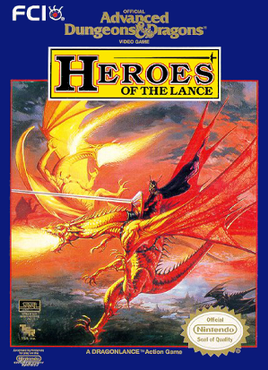 Heroes of the Lance is a 1988 game for PCs, the original 8-bit NES, and the Sega Master System. It's one of several games based upon Dragonlance, but unlike most of those, it is a side-scrolling action game.
Advertisement:

The player takes the role of the original Heroes of the Lance: Tanis Half-Elven, Goldmoon, Caramon Majere, Raistlin Majere, Sturm Brightblade, Tasslehoff Burrfoot, Riverwind, and Flint Fireforge. Your mission is to explore Xak Tsaroth and retrieve the Disks of Mishakal from Kisanth, the black dragon who holds them. Much of the game's plot is adapted from the first Dragonlance module, Dragons of Despair.

At the start of the game, the player's party consists of all eight heroes, controlling one at a time. Each hero has different attacks, spells, attributes, and abilities; for example, Raistlin is ridiculously fragile, but floats for a fairly long distance when he jumps, which means the player can only circumvent certain traps if Raistlin is the main character.

Heroes of the Lance is notorious among modern gamers for two reasons. The first is that it's ridiculously difficult, as any character that dies is permanently dead unless resurrected by means of Goldmoon's crystal staff. If you abandon a dead character's body or they fall down a pit, you can't raise them and they're gone for good. This is combined with slightly awkward gameplay.

The second, and more famous, reason is that the NES port of Heroes of the Lance is terrible. The MS-DOS version has a modest fan following, received positive reviews upon its release, and actually led to two similar sequels, but the NES cartridge is a glitchy, nearly-unplayable mess.

Many later writers on the subject, particularly Seanbaby, have labeled Heroes of the Lance as one of the worst games on the NES, with many lists placing it comfortably in the bottom three. As a result, it attracted a mostly-ironic fandom in the 2000s.

Tropes in Heroes of the Lance include: