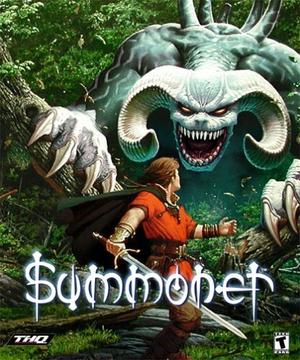 In the land of Medeva, there is a legend: Every generation, a child is born bearing a mark on his right hand. The mark of the summoner. Using magical rings, the summoner can call forth powerful monsters and demons to do his bidding. Through history, summoners have used their powers to become Kings, Warlords and Sorcerers.

Joseph, born in the village of Ciran, is the latest bearer of the mark of the summoners. 9 years ago, Joseph met an old traveling monk named Yago, who gave Joseph one of the summoner's rings. He helped Joseph master his talent, until the day where raiders attacked Ciran. Joseph called forth a demon sleeping inside the ring, who slaughtered the raiders before turning on the villagers, killing everyone but Joseph and Yago. Joseph threw the ring down a well and told Yago to leave, to never approach him again. He then made his way to the village of Masad, to rebuild his life there in obscurity. That is, until a group of masked warriors from The Empire of Orenia attack the village, butchering its inhabitants in the hope of finding the one with the mark of the summoner. And that is where the adventure begins.

Summoner is an RPG released in 2000 by Volition and published by THQ for the Playstation 2 as one of the first RPGs for the system and later ported to Windows PCs and the Macintosh in 2001. The game was noted for its combat system, where characters take turns but attack in real time, with chain attacks that rely on the players timing. However, the game is better remembered for its story, set in a fully original world with four fully developed religions and its own history. The player controls Joseph, as he is joined in his adventure by 3 other characters. Flece, a thief; Rosalind, Yago's abandoned daughter and a priestess of the island monastery of Iona; and Jekhar, a medevan knight who grew up in Ciran, and has vowed to kill Joseph for slaughtering his family.

A sequel for the PS2, Summoner 2 (later ported to the Nintendo GameCube as Summoner: A Goddess Reborn) was released in 2002. It was given a more action-adventure feel, and followed a Distaff Counterpart, Maia, who is Joseph's opposite in nearly every way. Where he sought to flee his destiny and followed The Call only reluctantly, Maia embraces her destiny and seeks to fulfill it.

The game has been re-released on Steam and GOG.com.