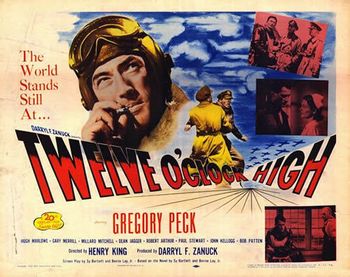 The film is set in 1942 and 1943 at the air base in Archbury, England, which is the home of the American 918th Bombardment Group (Heavy) of the Eighth Air Force. The 918th is a "hard luck" unit that is suffering from severe morale problems caused by the seemingly pointless bombing runs they go on and the horrific casualty rates they are suffering.note In Real Life Allied bombing crews did indeed take severe casualties, much worse than infantrymen; a bomber crewman's chances of making it through the scheduled 25 missions alive were poor. Their commander, Col. Keith Davenport, is personally brave and a hero to his men, but "over-identification with the men" has led him to be unable to make the hard decisions that must be made in combat. Brigadier General Frank Savage (Peck) relieves Davenport of command and takes command of the 918th himself. Savage brings down the iron hand of discipline on the demoralized group and seeks to drive the men to be better, but they rebel against his strictness.

Considered to be one of the finest war films ever made due to its attention to detail, taut storytelling, realism, and unflinching portrayal of the stress of combat. The film is required viewing at United States military academies and Officer Training Schools due to its depiction of different leadership styles and how difficult, if not impossible, it is to remain professional and detached regarding the men one leads in combat.

Adapted by Quinn Martin into a TV drama that aired on ABC from 1964–67.