Literature / The Bridges of Madison County 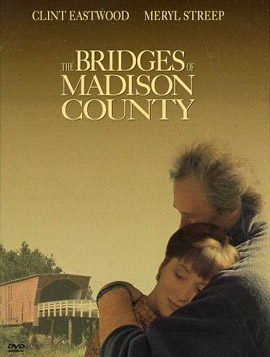 The Bridges of Madison County is a 1992 best-selling novel by Robert James Waller.
Advertisement:

The novel follows Francesca Johnson, a married but lonely Italian woman, living in 1960s Madison County, Iowa, who engages in an affair with Robert Kincaid, a National Geographic photographer from Bellingham, Washington who is visiting Madison County in order to create a photographic essay on the covered bridges in the area.

The Bridges of Madison County was adapted into a film in 1995. It was produced by Amblin Entertainment and Malpaso Productions, and distributed by Warner Bros. The film was produced and directed by Clint Eastwood with Kathleen Kennedy as co-producer and the screenplay was adapted by Richard LaGravenese. Eastwood starred as Robert Kincaid, with Meryl Streep as Francesca Johnson.

It was also adapted into a stage musical with a book by Marsha Norman and music and lyrics by Jason Robert Brown.