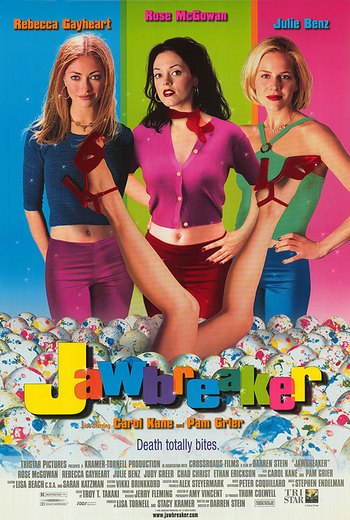 "This is high school. What is a friend, anyway?"
—Vylette
Advertisement:

The movie starts with the popular girls of Reagan High fake-kidnapping one of their group, Liz Purr (Charlotte Ayanna), as part of her seventeenth birthday, only to find when they arrive that she has choked to death on the jawbreaker candy that they used to gag her. Alpha Bitch Courtney Shayne (McGowan) then leads the others to create an elaborate cover story that would paint Liz's death as an accident resulting from a kinky sexual encounter and get them off scot-free.

One of the girls, Julie Freeman (Gayheart), struggles to come to terms with what they've done and is summarily shunned by Courtney and her lapdog, Marcie Fox (Benz). On top of this, she is replaced by the geeky Fern Mayo (Greer), who Courtney transforms into the glamourous Vylette in return for the girl's silence. But the attention lavished upon "Vylette" soon goes to Fern's head and she begins to encroach on Courtney's position as the Queen Bee, only to discover exactly why that was a bad idea as she is publicly humiliated. Meanwhile, when Julie is given a box of Liz's possessions, she stumbles upon something that will prove to be Courtney's downfall just as she prepares to accept the title of Prom Queen that Liz's death left her free to claim.