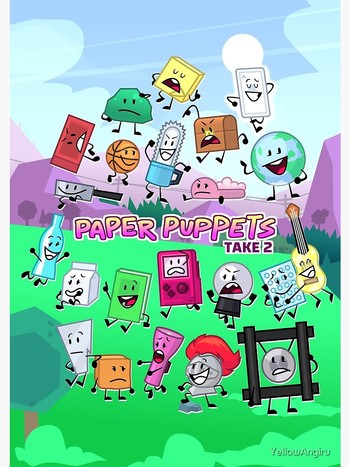 Paper Puppets is a show created by Yellow Angiru

(Sutton H.) about 19 contestants competing for the grand prize of 1 million dollars. However this show differs from other Object Shows as it was not animated and instead recorded live-action with crudely cutout, you guessed it, paper puppets.

Here are the playlists for season 1

if you wish to view the episodes.

Bag: Wait Before I go, Pan what were you gonna say to me before you got eliminated in episode 10?
Pan: Oh! I was gonna say that I really..., really..., REALLY like you...
Bag: (Gasp happily)
Pan:...topian trees.
Bag: Wait, what?
Pan: Utopian trees. They're one of the rarest trees ever!