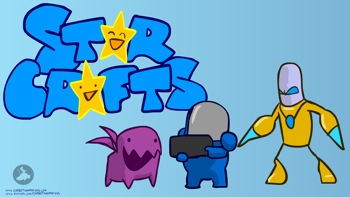 If only the actual Zerglings from StarCraft were this cuddly.

You know that Real-Time Strategy game, StarCraft II? The one where the Terrans, Zerg, and Protoss duke it out on a regular basis? The one with the insanely popular multiplayer?

Take that game, chibi-fy it a bunch, tweak the personalities of various units, imagine those same units having their own simple little lives, then throw in a healthy serving of Hilarity Ensues, and you'll get an idea as to what this series is all about.

released on roughly a weekly basis on Saturdays (more recently moved to a bi-weekly basis, along side Carbots other series, WOW Craft). In each short little episode (they generally run only a minute or two on average), the three armies wage the war you'd expect, but not quite in the way you might expect them to wage it, with hilarious results.

For other web series' developed by Carbots Animation, head over to WowCraft or HeroStorm. There's also a currently fledgling and ongoing series based on Overwatch titled Underwatched and a new series based on the Diablo series, DiabLoL.

of Starcraft 2 into the art style of Star Crafts is now available on the Starcraft 2 Arcade. Blizzard has also released StarCraft: Cartooned

, a Game Mod for StarCraft Remastered that renders the entire game in Carbot style.

After 7 years and 7 seasons, the series finally ended with the release of the grand finale on 21st December 2019.