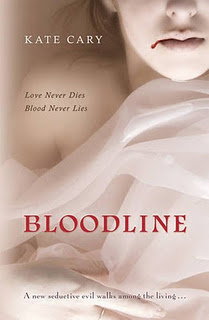 Bloodline is a 2006 novel by Kate Cary, continuing the story of Bram Stoker's Dracula.
Advertisement:

It is 1916, and Quincey Harker - a character whose birth was briefly mentioned in Stoker's epilogue - has grown up and become the commander of a regiment fighting in World War I. One of Harker's men is John Shaw, who makes a terrifying discovery: Harker is a vampire.

Taken home with trench fever, Shaw is cared for by Mary Seward, the daughter of Stoker's Dr. Seward. As John's recovers, he and Mary fall in love. But things take a disasterous turn when Quincey Harker returns from the battlefield and wins the heart of John's sister Lily. It is up to John and Mary to save Lily, not just from Harker, but from the son of Dracula: Count Tepes.