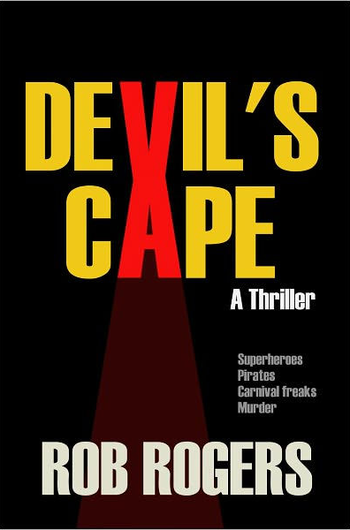 Devil's Cape is a novel by Rob Rogers set in a world of superheroes and supervillains. Although early in the story the narrative alternates between significant past and present events, the main storyline is set in the modern-day town of Devil's Cape, Louisiana, a former pirate town that attracts tourism mainly through its famous crimes, and the fact that it was home to the first named supervillain, notorious pirate St. Diable, and his nemesis Lady Danger.
Advertisement:

A group of carnies are exposed to the moment of death of a famous superhero, and as a result gain superpowers based on their own abilities. Taking the name of the "Cirque d'Obscurite," they make a name for themselves as a deadly group of supervillains, killing the superhero Doctor Camelot. When the rest of his team, the Storm Raiders, track the Cirque d'Obscurite to Devil's Cape to bring them to justice, they are all killed with brutal efficiency. They settle in as enforcers to the Robber Baron, Devil's Cape's resident well-known mob boss.

Around the same time as the Cirque d'Obscurite are rising, Cain Ducett, a young juvenile delinquent, has a run-in with Jazz Rydland, a girl his age with a deep interest in voodoo. When he knocks her down and almost kills her, she curses him, and he soon finds himself morphing into a demonic monster, sending him into a panic that drives him to take hostages, until he realizes the change is gone, seemingly imagined, and reforms his life. He leads a normal, respected life as a psychiatrist, dismissing the incident as hallucination, until twenty-two years later, he suddenly begins to change again and seeks out Jazz to discover that not only was her curse genuine, she made him relapse to force him to protect her - from the Robber Baron himself.

Katie Brauer discovers a secret of her father's several years after his death. He was the late Doctor Camelot, and she makes the decision to become the new Doctor Camelot and bring the Cirque d'Obscurite to justice - especially the Behemoth, who killed her predecessor.

Jason Kale, news reporter, refuses to use his powerful abilities for years, but his twin brother Julian is not as inclined towards restraint. Julian works with their uncle, who works for the Robber Baron himself. After the Storm Raiders are killed, Jason decides to take up the name Argonaut and take on the supervillains and more mundane criminals overrunning Devil's Cape.

Jason, Katie, and Cain all soon meet one another in pursuit of their goals. Upon realizing that they share those goals, they set their sights on the Cirque d'Obscurite. Unfortunately for the heroes, their enemies have been criminals and supervillains for much longer than they have been superheroes, and with greater experience, greater numbers, and the murders of an experienced, practiced team of heroes already under their belts, the Cirque d'Obscurite may be too much for three untested heroes to bring down.