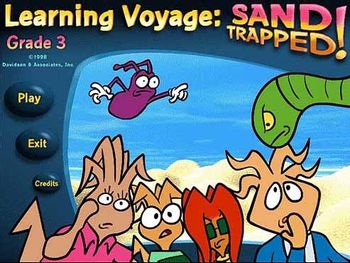 Learning Voyage was a short-lived series of edutainment games developed by Learningways, Inc., and published by their parent company, Davidson & Associates, in 1998. There were two games in the series. Learning Voyage: Sand Trapped! was for grade 3, and Learning Voyage: Swamped! was for grade 4. They were also released as Davidson's Learning Center Series: 3rd Grade and Davidson's Learning Center Series: 4th Grade, respectively. Both games included games in both math and reading; for example, a clown-dunking game where you would have to say whether a statement is an opinion or a fact, and a robot-building game where you build the robots by solving math problems.

A video of Sand Trapped! can be found here

Do not confuse with the Blaster Series. They're similar in a few ways, and a few ways only.