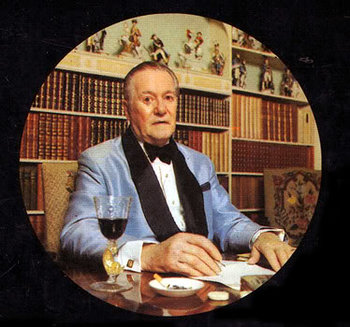 Dennis Yeats Wheatley (8 January 1897 – 10 November 1977) was born in London, inheriting a family wine business. He began writing novels after WW1 service and a decline in the fortunes of the family business.

His most enduring characters were those of the Duc de Richleau and his friends, who were to become Wheatley's most popular inventions. His work in the thirties seemed to be perfectly in tune with the spirit of the age, enforcing the virtues of imperialism in which he totally believed, and countering the rising threat of communism.

He worked in counter-intelligence and "black operations" during WW2. He continued writing prolifically after the war and his sales rocketed. In the UK alone he sold over 1,000,000 copies of his books a year during the 1960s.

Hammer Studios made adaptations of three of his novels. The Devil Rides Out and The Lost Continent (adapted from Uncharted Seas, a novel Wheatley reportedly confessed he couldn't remember writing) were released in 1968. To the Devil... A Daughter was the last film released in Hammer's classic period in 1976. Negotiations took place to turn some of his books into a TV series.

Wheatley's literary legacy falls into a number of distinct categories. There are the series novels, books that involve the same central character or characters more than twice. These series novels are: Duc de Richleau; Gregory Sallust; Roger Brook; and Julian Day. There are ten non-fiction titles; two collections of short stories; four crime-dossiers; and ‘out of series’ titles of which there are eighteen. Wheatley also edited two major collections of short stories for Hutchinson as well as the series of paperbacks, ‘The Dennis Wheatley Library of the Occult’, and wrote innumerable articles.

During the 1960s and 1970s Wheatley's work had phenomenal sales. However, forty years on, his books have all but disappeared from bookshops and public libraries. Where, W.H. Smith once displayed shelves of his titles, now there are none. Wheatley's work is firmly fixed within the white, Anglo-Saxon, protestant imperialism of the late nineteenth/early twentieth centuries. He is adamant about the superiority of the Anglo-Saxon race above all others and was sympathetic to the old South Africa. Sadism is depicted in his work, primarily directed at women (albeit not by the heroes). Satanism (the left hand path) equates in Wheatley's mind with socialism (the political left) and un-natural homosexuality.

Like many members of the British establishment in the 1930's, he leaned towards totalitarianism, praising both Mussolini and Franco and referring to Hitler as His Excellency in his pre-war book Red Eagle. In the Gregory Sallust war stories he makes Hermann Göring a largely sympathetic character. In Göring he saw an upper middle-class epicure and hero of the First World War with a strong sense of duty and nationhood, yet a man who could still share a dirty joke. These are the qualities that Wheatley possessed and admired in others.

Accusations of having fascist sympathies were levelled at Wheatley in the 1930s with some justification, but he never allied himself to the fascist cause in Britain. His political views were essentially Conservative, albeit to the right of that party. From a distance, however, he admired the tough stance of Italian and Spanish fascism, its patriotism and its pro-active anti-communism.

Proof exists that in the immediate post-war era (after 1918), Wheatley was closely associated with occultist, mountebank and self-styled Great Beast Aleister Crowley, as well as the showman occultist Montague Summers. Initiation and association with Crowley's school of ritual magic would explain the detail he was able to pack into his occult novels. Later, he tried to downplay and even deny his association with Crowley, though it is telling that an illustration in the copiously illustrated The Devil and All His Works clearly shows the frontispiece of an occult book signed by Crowley "To my great friend, Denis".

Wheatley's novels are capable of creating a strikingly cinematic world of luxury and excitement. (Indeed, several of his books, especially The Devil Rides Out, have been adapted for film.) His characters all live life to the full, defeating evil at every turn, unfettered by financial concerns.