Literature / The Ka of Gifford Hillary 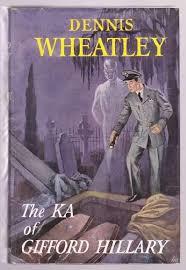 The Ka of Gifford Hillary is a horror/supernatural story by author Dennis Wheatley. It concerns itself with the greatest of all mysteries: what happens after death?

The story opens with Sir Gifford Hillary and Wing Commander Johnny Norton involved in plans to counter the might of Soviet Russia,but interest soon centres on the evil Lady Ankaret and the tragedy which occurred at Longshot Hall, South Hampshire, on the night of the 9th September. Ankaret is revealed to be doubly evil: both a black magician and a Communist spy (do not try to untangle the contradiction involved in someone being both a materialist atheist and a Satanist).

A victim is struck down, and from that moment onwards the events which follow seem, at first, fantastic and unbelievable–but are later realised to be entirely logical. What does happen after death? how does Gifford Hillary cope with being - temporarily - a disembodied spirit without a body, wandering unheeded in the world? Among other things, he gets to see what his family are really like - and it ain't pretty. And why should Sir Gifford eventually find himself in prison, on trial for his life?

If you can get past the stupefying social snobbishness of the author and the fact he isn't shy about lapsing into long author discourses on politics - Wheatley was somewhere to the Right of Ghenghiz Khan and would make Margaret Thatcher look liberal - this is actually quite a pacy, exciting, supernatural thriller with a lot of stuff to enthral, scare, and engage the imagination.