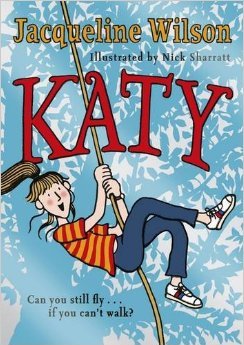 Katy is a modern retelling of What Katy Did by Jacqueline Wilson.

Katy is the eldest of of six siblings, and struggles to uphold her position as a responsible big sister, given her reckless and adventurous nature. She's constantly getting into trouble, even if she genuinely has good intentions, and often finds herself at odds with her 'wicked' step-mother, Izzie.

Then Katy falls off a rope swing and breaks her spine, leaving her paralysed from the waist down. Suddenly she can no longer be the big sister she wants to be to her siblings, she has to be cared for by the step-mother she detests so much, and she can no longer imagine her fabulous future while she's stuck in a wheelchair.

Katy and What Katy Did share the same main cast of characters, though with some notable differences, follow a similar storyline, and both involve Katy learning how to adjust to the new direction that her life has gone in.

A three-part television series based on Katy was shown on CBBC in March 2018.

This book provides example of: