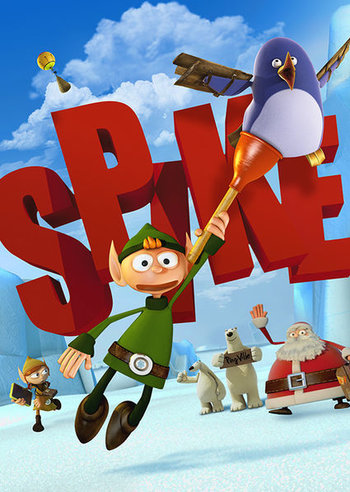 Spike is a French computer-animated Christmas movie about a novice elf at Santa's Workshop who accidentally loses the mailbag containing the letters from children to Santa Claus (actually, it was the fault of his friend, a blue penguin) inside the bank vault of the local Penguin Village. Spike must then break into it to recover the letters with the help of an older elf overseer, unaware that a couple of polar bears are trying to rob the bank at the same time!

The film had a sequel, titled simply Spike 2 (they were released together on DVD). A year after the events of the original film, Tony (the polar bear thief from the first film) has been forced to work at the workshop to make amends. He claims to be rehabilitated—but no sooner does he leave than Santa's reindeer are kidnapped! Spike and his friends (with the help of a female elf cousin, a would-be TV reporter) must find and rescue them.

Not to be confused with the horror film Spike, the television network, or Spike Lee.

Tropes in Spike include: