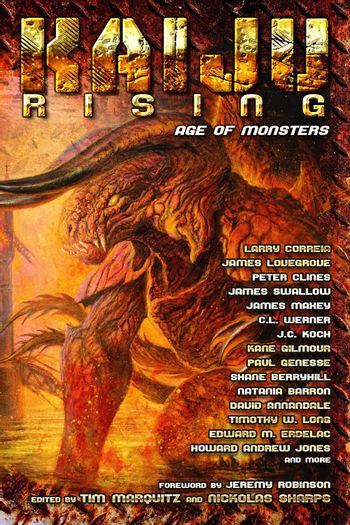 Giant monsters. What more needs to be said?
"Enter Kaiju Rising: Age of Monsters. This collection of Kaiju shorts continues the traditions begun by Kaiju pioneers, bringing tales of destruction, hope and morality in the form of giant, city destroying monsters. Even better, the project was funded by Kickstarter, which means you, Dear Reader, made this book possible. And that is a beautiful thing. It means Kaiju, in pop-fiction, are not only alive and well, they’re stomping their way back into the spotlight, where they belong. Featuring amazing artwork, stories from some of the best monster writers around and a publishing team that has impressed me from the beginning, Kaiju Rising: Age of Monsters is a welcome addition to the Kaiju genre and an anthology of epic proportions. My inner nine-year-old is shouting at me to shut-up and let you get to the Kaiju. So, without further delay, let’s all enjoy us some Kaiju Rising."
Jeremy Robinson, bestselling author of Nemesis Saga.
Advertisement:

Kaiju Rising: Age of Monsters is a collection of 23 stories published by Ragnarok Publications focused around the theme of strange creatures in the vein of Pacific Rim, Godzilla, Cloverfield, and more. The anthology opens with a foreword by JEREMY ROBINSON, author of Project Nemesis, the highest selling Kaiju novel in the United States since the old Godzilla books—and perhaps even more than those. Then, from New York Times bestsellers to indie darlings Kaiju Rising: Age of Monsters features authors that are perfectly suited for writing larger than life stories.

This anthology contains the following tropes: