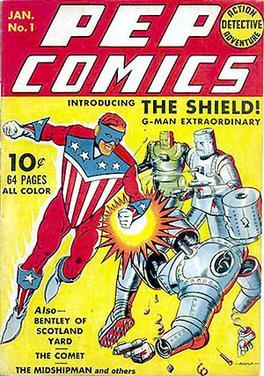 The Shield is the name of a patriotic superhero created by MLJ (now known as Archie Comics). There have been several different incarnations of the character to date, with the third being introduced in 2015.

The Shield debuted in 1940's Pep Comics #1. He is considered the first patriotic superhero, predating Captain America by over a year. In his classic origin Joseph "Joe" Higgins is a chemist who gives himself invulnerability, super strength, and the ability able to make great leaps. Using the initials S.H.I.E.L.D. as his secret identity, Joe later becomes an FBI agent.

In 1959, Joe was replaced with Lancelot Strong, but his comic only lasted two issues. Lancelot's scientist father did tests on him as an infant in order to create superhumans. After his father was killed by foreign agents, Lancelot was adopted by a farm couple. It wasn't until he was older that he discovered his powers, which included super-strength, flight, the ability to generate lightning, and near-invulnerability. Using a patriotic costume his adopted father made, Lancelot became the Shield. He later joined the Army.

Both versions of the character were revived by Red Circle Comics in the 1980s. In 1991, Archie licensed their superheroes to DC Comics. Under the imprint called Impact Comics, the series The Legend of the Shield lasted from 1991 to 1995. In 2015, Archie's began publishing new Shield comics under their Dark Circle Comics banner. They introduced a new version of the character, a woman named Victoria Adams.

Not to be confused with either the television show The Shield or the wrestling group The Shield.