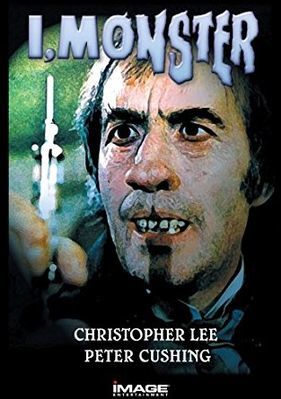 "Now, this might sting a bit..."
A 1971 Amicus Productions horror film. Dr. Charles Marlowe (Christopher Lee) is a renowned psychologist in 1900s England. Spurred by debates between his colleague Dr. Hastie Lanyon (Richard Hurndall) and lawyer Frederick Utterson (Peter Cushing) about whether human beings are born good or evil or made that way through their life's experiences, Marlowe takes it upon himself to experiment with the idea.

He invents a serum which he injects himself with in the hopes of separating his evil half from his good... but instead it simply changes his personality into that of a completely different individual, the unpredictably volatile and sadistic Edward Blake (Lee again, with minimal makeup). "Blake" begins committing horrible crimes throughout London, and it's up to Utterson to stop him.

If that plot sounds familiar, it's because I, Monster is an adaptation The Strange Case of Dr. Jekyll and Mr. Hyde, and rather faithfully, too... apart from the rampant Adaptation Name Changes going on. Not to mention a completely new title. Both the new title and the name changes were so people going in would not know the, now well-known, plot twist of the original story.