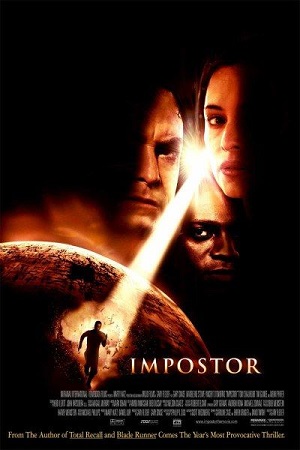 Impostor is a 2001 science-fiction film, starring Gary Sinise, Vincent D'Onofrio, Madeleine Stowe, and Mekhi Phifer. The film was based on a 1953 short story by Philip K. Dick, and was intended to be the first of a science-fiction anthology with the Isaac Asimov story The Last Question and the Donald Wolleim story Mimic to follow after.

In the middle of the 21st century, humanity was attacked by an alien civilization from the Alpha Centauri system. The Centauri have bombed Earth continually for over 45 years, reducing large parts of the Earth to wasteland and destroying effective government in others. A global totalitarian government takes control and the major cities are fitted with defensive shields to protect the last vestiges of civilization. The Centauri subsequently start to resort to more covert means to destroy humanity, using biorobots armed with atomic bombs to infiltrate the cities and kill key political figures.

Dr. Spencer Olham (Gary Sinise) is a renowned scientist working on government weapons projects. One day he is unexpectedly arrested and accused by Major Hathaway (Vincent D'Onofrio) of the Earth Security Administration of being a robot sent to assassinate the Chancellor during an upcoming meeting. Olham goes on the run and heads to the outer regions to prove his innocence.