Film / If Footmen Tire You, What Will Horses Do? 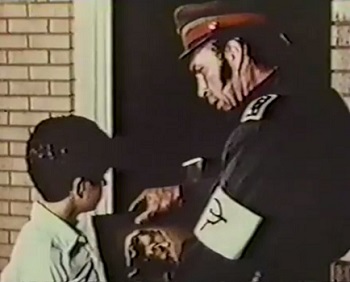 "Now, if you will step on this picture of your Jesus..."

One beautiful morning, a young sexually-active woman named Judy stops by her local church, where the fire-and-brimstone preacher is delivering a sermon about the coming horrors of communism.

That's the Framing Device for If Footmen Tire You, What Will Horses Do?, a 1971 fundamentalist Christian Red Scare propaganda film produced by Reverend Estus W. Pirkle, who also appears As Himself in the role of Judy's preacher. Reverend Pirkle is here to warn us that America must abandon its sinful ways and turn back to God, or else it will be taken over by communists. The film's director is Ron Ormond, a man who could not be stranger bedfellows with Reverend Pirkle. Previously the creator of Exploitation Films like Mesa of Lost Women and The Monster and the Stripper (and before that, westerns like Outlaw Women), Ormond became a born-again Christian after surviving a plane crash.

Thus, comes the unholy matrimony of fundamentalist preacher and Ed Wood-style filmmaker. Throughout the resulting one-hour... experience, we're treated to Imagine Spots which illustrate the horrors of 1970s American society, tell of Judy's various misdeeds, and hysterically warn of what America will be like under communist rule.

During the 1970s and 1980s, this film was circulated amongst the more fundamentalist churches in the United States — and not just in the Deep South. Today, it's something of a Cult Classic for different reasons. See it here.

, where Estus Pirkle preached on what awaits Christians in Hell and Heaven. Both of these films differentiated by featuring guest speakers, and Biblical re-enactments, though violent scenarios remained in them, particularly the former's depiction of Hell.

I'm not a Christian

Tommy denies being a Christian, but the evil communists demand that he prove it.

Example of:
If You're So Evil, Eat This Kitten!

I'm not a Christian

Tommy denies being a Christian, but the evil communists demand that he prove it.