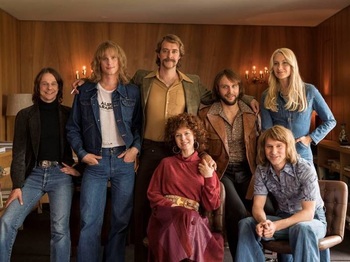 From left to right: Kenneth, Ted, Stig Anderson, Frida, Benny, Björn and Agnetha. You might have heard about the latter four.
Advertisement:

Ted: För kärlekens skull ("Ted: For Love's Sake" in English), also known as Ted: Show Me Love, is a 2018 Swedish film directed and written by Hannes Holm and produced by Lena Rehnberg. The film recounts the life of Ted Gärdestad (Adam Pålsson), who was one of Sweden's best-known pop artists in the 1970s, his personal relationships, including that with his brother Kenneth (Peter Viitanen), who wrote the lyrics for Ted's songs, and Ted's struggles with schizophrenia.