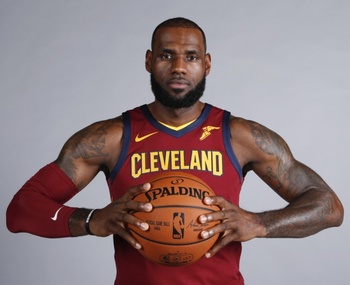 LeBron in his second stint with the Cavs.
Advertisement:

LeBron Raymone James (born December 30, 1984 in Akron, Ohio) is an NBA small forward for the Los Angeles Lakers. Previously, he played for the Cleveland Cavaliers and Miami Heat, winning championships for each team he's played.

Considered to be the face of the league since at least the start of the 2010s, if not earlier than that, LeBron is the holder of four NBA championships and four NBA MVP awards. With numerous other awards such as four NBA Finals MVP awards, an NBA scoring title, selection to the NBA All-Star game in all but one of his 17 seasons in the league, records of 16 overall and 13 first-team All-NBA selections, a Rookie of the Year award, and two Olympic Gold Medals, he is considered by many to be the greatest basketball player since Michael Jordan (and some will argue that James is superior). Not to mention that he's the only individual to have been named Sportsperson of the Year by Sports Illustrated three times.* 2012 and 2016 by himself; 2020 with four others in three sports

He produced and has starred in Space Jam: A New Legacy, the long-awaited sequel to Space Jam (which, fittingly, had starred Jordan).